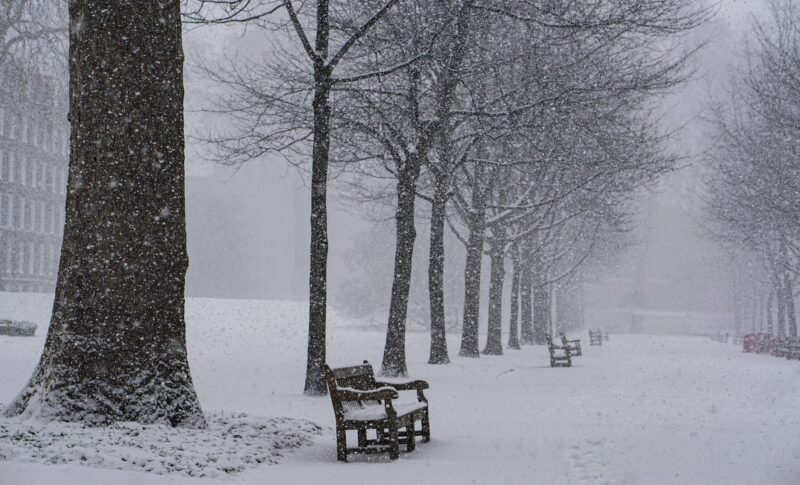 In Japan, we have a lot of natural disasters（自然災害）such as typhoons, earthquakes, and tsunamis. They always bring as a lot of troble. Now, the Great East Japan earthquake was six years ago. I still remember it clearly.

I want ti be prepared for disasters. So, I bought a go-bag（非常持ち出し袋）for emergencies. I researched a lot of website about it. I worry about many things, so now I have one go-bag, and two plastic bags of food and water. In my apartment, it looks like I spend a weekend shopping at AEON.

My hometown, Buffalo, is notorious（有名な・悪名高い）for blizzards（大吹雪). Because of the city’s location next to Lake Erie, it gets a lot of snow starts in November, and usually lasts until April.

Blizzards are a big problem. In big blizzards, there are often driving bans(運転禁止). The weight of the heavy snow knocks down(潰す) trees and cause some roofs to collapse(崩れる). Sometimes the electricity stops for several days.

Despite causing so much destruction, snowstorms have some nice points. Schools and businesses often close, so people can enjoy a day off. We had around 5 days of school cancelled each year when I was a student. Many houses have fireplaces(暖炉), and it’s nice to gather around a warm fire with your family. People often help shovel snow in front of their elderly neighbor’s houses. It brings the community together.

People who never experienced big blizzards often think that they make life too hard. However, for people in Baffalo, snowstorms are just a part of nomal life.

As I think back the different places I’ve lived, many memories of extreme weather conditions come to mind.

In Taiwan, I remember typhoos hitting the island every year. On one hand, it was quite exciting, but on the other hand, people would sometimes get injured or killed. Some crops(作物) would often experience damage as well.

When I lived in Minnesota in the United States, snow storms would cause traffic jams and accidents because of low visibility() and icy roads. Even waiking on the sidewalk was a little bit dangerous. I ended up slipping on the icy sidewalks many times, so I had to learn how to walk carelully on the ice.

Typhoons were most devastating（破壊的な）weather events that I experienced when I lived an the Philippines. In 2009, a tyhoon hit us that killed well over 300 people, injered many and displaced() thousand of victims. Part of the reason for so much death was that vulnerable peope lived in low-lying areas or near hills that had experienced deforestation(森林伐採). Of course, mudslides（土砂崩れ) and flooding(洪水).

Finally, there were the monsoons in India. Whenever a hard monsoon poured down, the poor communities where I lived and worked the contaminated(汚染された) water.

I’m thankful to have experienced those harsh weather events, but am reminded just how privileged I am to have remained safe in the midst of them.