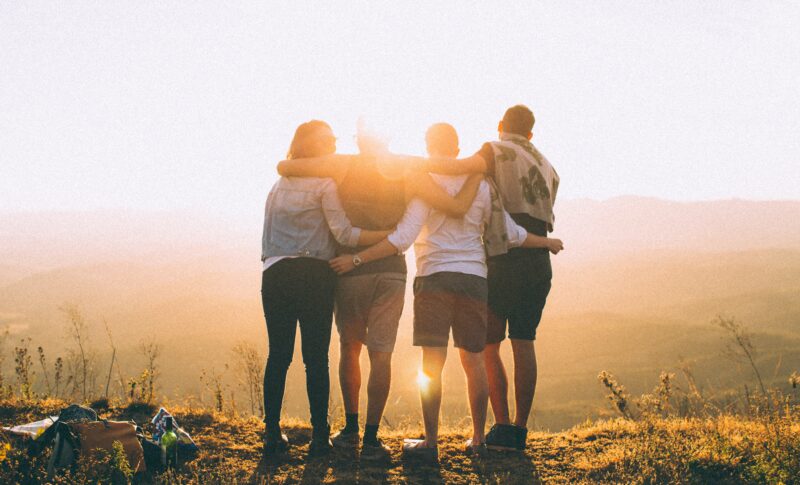 I’d like to introduce my family. There are five people in my family. I have a mother, a father, an older brother, and an older sister. They all live near my hometown. Both of my siblings (兄弟姉妹) are married. My sister has two sons. My nephews (甥) are 11 and 9 years old. They are noisy and crazy.

I don’t have many relatives (親戚). I have two sets of aunts and uncles. One set lives near my hometown.
They have two children, my cousins.

The other set lives far away, in Georgia. They also have two children.I don’t know them well. I’ve met them only a few
times, at weddings and funerals (葬儀).
By American standards (アメリカの基準では), my family is small. But, we are close (親しい).

Lv.2 My Mother, the Reader

My mother has always been quiet. She worked a lot and said very little to me. I didn’t know many things about her as a child (子供の頃). We usually sat silently together on weekends. Once a week, she took home two books – one for me, and one for her. I looked forward to these. When she had some free time, she would sit on the couch and read. She never asked me to read with her. But every time she sat in the couch with her book, I every time she sat in the couch
with her book, I would sit across from her with mine. We did this for at least an hour. This is how we spent time together. Now, once a week, I buy my mother a book on her Kindle. We don’t read together anymore, but we talk about our recent reads ((読了した)書籍) every Sunday morning. This always makes both of us very happy.

Whether due to divorce, loss of a spouse, or by choice, being a single mother can be difficult in any country. Not only do they have to deal with the social stigma (不名誉), they must also work harder to provide for their family than a traditional two-parent household (家庭). And that’s what I’d like to talk about today: the financial struggles of Japan’s single mothers.

According to a 2014 OECD survey, Japanese single mothers had a relative poverty rate (貧困率) of 50.8%, which
is the highest rate for single-parent households in the developed world. There are many reasons for this shocking statistic, but one of the most important is the wage (賃金) system. In Japan, it is common for part-time employees to get paid less per hour than full-time employees, even if they do the same work. This is because employers believe full-time employees add more value to the company. However, this way of thinking is not common in other developed countries (先進国), where all employees with the same job get paid the the same hourly wages.

Fortunately, the Japanese government is working to address (対処する) this problem. In fact, on April 1st, 2020, they introduced a new law that requires equal hourly wages for employees doing the same work. This is a major step towards helping single mothers, who often can’t work full-time, become financially independent.